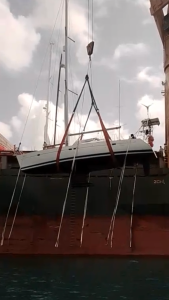 So it’s a sad farewell to the Caribbean, certainly not the way we thought we’d be leaving either! Arranging everything quickly and from afar was not without without stress, starting with getting the storage yard at Jolly Harbour marina to confirm they would be prepared to move yachts out of the way to get to Silhouette. I must say the entire team at the marina were very helpful and even recommended a skipper to prepare Silhouette, take her from the travel hoist to a marina berth and then motor her to the transport ship in St John’s. We had paid for 6 months storage in advance and said we didn’t want a refund as we were messing them about since January… first we were leaving then staying then leaving etc etc! Jo Lucas the general manager however said that’s not how they operated and was happy to pay for all the costs relating to getting Silhouette to the ship out of the credit on file & return the remainder. Once everything had been paid there was a credit of around £17oo so we agreed to take half and asked the office to donate the other half to an Antiguan charity of their choice. Jo suggested a specific food bank which directly helped locals in the hotel trade who had lost their jobs overnight due to the COVID-19 virus. These hotels had shut down and laid off all their staff leaving them with nothing. This was the least we could do.

Our skipper “Daniel” was amazing with WhatsApp videos updating us on what was going on and full video of the lift onto the simply huge ship AAL Melbourne. Unfortunately as Silhouette was being lifted the wind picked up and a gust took control which caught the stern making the bow hit the side of the ship….. 5 times 😦 Luckily Daniel’s filming showed the hits, the deck crew struggling to hold Silhouette steady & the load masters shouting, so no denying contact. Peters & May have taken lots of photos which don’t show visible damage, but they and us will take a good look with a surveyor if required in Southampton. It does look like the anchor took the hits so fingers crossed.