We had a great sail down past St Vincent into Admiralty bay at Bequia. We decided not to visit St Vincent as reports from cruisers have been less than complimentary with theft fairly commonplace. Whilst this may be unfair on the island we decided to take a more security based view. 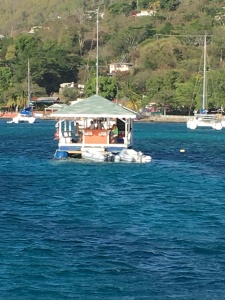 Everyone’s view of a destination is personal, for us we absolutely loved it. The moment we arrived at the anchorage it felt homely, and by pure coincendence we anchored just behind Bar one…. a floating bar !!! We sailed in company with Crean who arrived a little after us, who said cats were faster than monohulls 🙂 We absolutely flew down past St Vincent rarely dropping below 7 knots and mostly in excess of 8kts.

Once there it was really good for Charlotte to spend time with Ciara as they are the same age. This meant they could talk about stuff we didn’t want to know about !!! The only town on the Island is lovely with shops, well stocked supermarket, bars and restaurants most with free WiFi. You could tell the bay loves its sailing visitors as there were so many dinghy docks available, most leading to a bar! 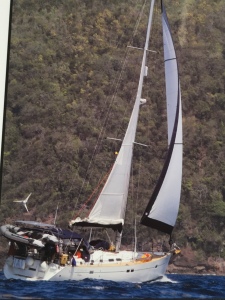 Together with Brendan & Ciara we hired a taxi for an island tour, this being the best way to get about. We were taken to all points on the island including the highest and at my request we went right down south past the tiny airport to see the development called “Moonhole”. The best thing to do is google it as it’s really odd but if you’re wanting to live a simple life with no frills you can buy a unique dwelling quite cheap…. forget your hair drier though as there’s no electricity!

We also visited the turtle sanctuary, set up to help protect these wonderful creatures. This was a prelude to when we headed down the Tobago Cays.

Eventually time ran out and Crean headed back up to St Lucia as Ciara had a flight booked back to Ireland as she had a summer job waiting. We should meet up with Brendan in early June though in Grenada. We moved on down to Canouan, finding for us a very very quiet island with closed hotels no “safe” place to land our dinghy. Chris Doyles guide mentions the wind can howl through the hills, he was right as it was one of the more uncomfortable nights at anchor ending up with me napping in the cockpit incase we dragged. At least the batteries remained in float phase all night!!! In the morning one of the local boat boys came out to ask if we were ok as it was so windy, if they thought it was then it certainly was & we’re not in hurricane season yet! One night was enough so we headed down to Mayreau looking for calmer conditions.

Mayreau is one of the smallest inhabited islands in the Grenadines with about 1000 permanent residents. We’d hoped to get into Saltwhistle bay but its a really small bay and was filled with cats so ended up in Long bay just a mile to the south. This is the main bay with a pier for the ferries, the stunning beach fringed with palm trees an easy swim away and calm waters!

This is a laid back island and the first time we found the local supermarket to be as we’d expected before leaving the Uk. Visiting huge supermarkets with so much on offer makes you forget not everyone is so lucky. I will never moan again if Asda (Walmart) are out of a particular item! I was in particular looking for yoghurt to go with the chilli being cooked and was told “I stock it but am out, next delivery in 2 weeks”.

Around the corner from Mayreau is the famous Tobago Cays, a reef protecting some very small islands which have some of the clearest water you’ll see. This was also the place we were likely to see turtles up close. Access to the area is surrounded by rocks and with strong currents accurate pilotage is a must! It was worth the visit…… 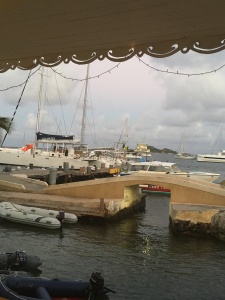 After Mayreau it was a 6 mile sail to Clifton in Union Island, the last of the Grenadines. Clifton harbour is protected by reefs (yes there’s a lot of reefs around here!) and has a small but pretty town with plenty of dinghy docks including one by the Bougainvilla which is accessed by an arch just wide enough to get a dinghy through. With the swell you have to line up and just go for it then brake quickly once through…. good fun. This was also where we all celebrated Charlottes 21st birthday, and had a lovely meal in the restaurant there, with the very friendly staff even decorating our table with balloons. 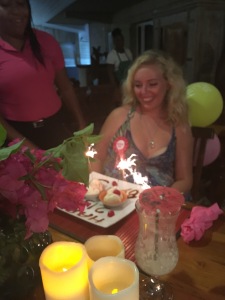 In the town there’s at least 3 supermarkets although all sell pretty much everything making them look more like jumble sales! We did notice just how many stray dogs there were wondering round, all looked well and didn’t bother anyone. We were in the sports bar and one decided to lay down at our feet in the shade, not even trying to get food from us.

These islands are so different from where we used to live, a traffic jam here is created by the most unusual events !!! 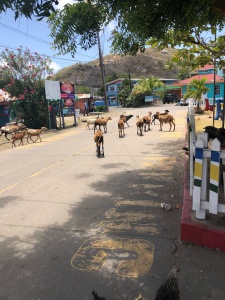 After 3 nights in Clifton we checked out with customs & left the Grenadines heading off south to Carriacou which is part of Grenada and hopefully our base until November.