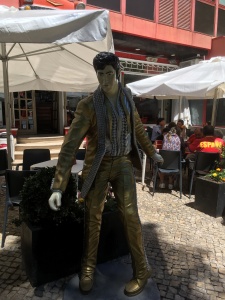 Figueira de Foz was a lively town, like most in this part of Portugal it’s set up for tourism with plenty of hotels and a huge beach with walkways across the sand to the sea as it’s so far from the promenade! Live music was on every night and on our last night a stage was set up over the town centre mini lake. The “as usual” free entertainment was really good and completely full.

The marina was a little odd in that you had to stop at the reception pontoon to check in and receive a fob to get through the pontoon gates in & out. This is fine until you check out as you hand the fob in and can’t get back to your boat! I couldn’t be bothered to wait for someone to let me back in so rowed the tender across. Security was excellent though so can’t have it both ways.

There aren’t too many places to stop down the coast as it the swell is relentless so after leaving we went straight to Peniche missing out Nazare as it can be prone to fishing boat swell. We arrived at Peniche and tied up next to “Festina Lente” another ARC+ yacht. We did feel a bit bad tying up to them as they were much smaller than us (37 feet) so used shore lines to ease the pressure on them. Other than meeting another ARC+ boat, we couldn’t wait to leave and headed off at first light to Cascais.

What can we say about Cascais? In our last post we all agreed Vannes was the best place we’d visited. Cascais has now taken top spot! It’s like Saint Tropez but without the high prices. A beautiful town with a great free anchorage and an expensive marina. We stayed for a week which was perhaps 3 days longer than we thought we would… but it was so lovely there it was rude not too. Another huge stage set up for a week of live music from some big Portuguese bands which we heard for 2 nights before leaving.

Those of you at a certain age will remember the US tv comedy series “Happy Days” starring Henry Winkler as the “Fonz”. It was based around the 1950’s and a diner called funnily enough “Happy Days”. Cascais has a Happy Days diner set up exactly as the series and was great, the statue of the Fonz marking the entrance. We did stay in the Marina de Cascais for 1 night as we wanted to catch the train to see Lisbon. For a premier marina in a premier location we were very disappointed with the facilities. The toilet and showers were very tired and really need replacing immediately. The staff were excellent though. There was a jetty which the local fishermen used but it was also a useful dinghy dock. Very important to remember the tides though…..

One of Charlottes old friends from school works on a super yacht and by coincidence it was in Cascais when we were so she managed to get the evening off and visit. Great to catch up and for Charlotte to spend time with someone her own age too.

Lisbon is a very busy city with sightseeing tour buses, trams and tuk tuks everywhere. We knew we’d never get to see a lot if we didn’t join in so hired a tuk tuk for 90 minutes at a cost of 60 euros. The driver bombed us around back streets and up hill to see many historical churches and land marks. We stopped at a site which was going to be high rise apartments but as the foundations were being dug, a 1st century roman theatre was found. The development never happened and the theatre has been exposed and secured as an attraction. I reckon the developers were hugely out of pocket there though!!! 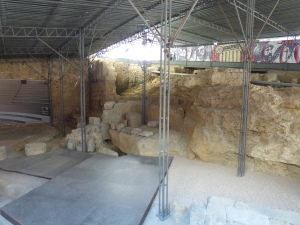 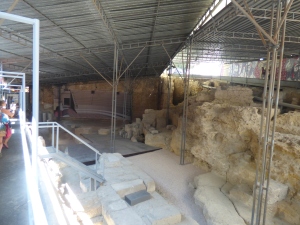 On the way back from Lisbon we got off the train early to visit Belem where the Portuguese war memorial is and a huge sculpture of Henry the Navigator. This Monument to the Discoveries was built in honor of Henry the Navigator, who was instrumental in the success of the Portuguese explorations during the fifteenth century, a period now known as the Age of Discoveries.

After a week we said goodbye to Cascais and sailed off for a quick overnight stop in Sines. Mainly a petrochemical port, there is a small inner harbour with a marina and an anchorage which is open to swell . We anchored and it certainly was “open to swell” with a poor nights sleep rolling around.

At dawn we left heading for Cape St Vincent and the Algarve!