Our arrival in La Rochelle meant there was time to do a couple of jobs which involved tearing the cabins and cockpit lockers apart. Fortunately Caroline & Charlotte had flown back to the UK for 8 days so no worries about living in a mess with 3 on board!

Our ais has been very intermittent and I traced it to a faulty vhf cable. Our ais has its own aerial mounted on the arch rather than a splitter to the masthead vhf aerial, so running a new cable around the lockers and under the port aft cabin was no small task. Whilst in a mess, I also changed the wet exhaust hose which was going soft. There are always jobs to do on a yacht, the plan was and is to stay on top of them rather than let them build up.

The Minimes marina in La Rochelle is huge with about 4500 berths, the visitors section had a lot of Fountaine Pagot catamarans all brand new although there was plenty of space for us. One day we were talking to a couple on a new cat and they had completed a circumnavigation some years ago. It turned out they crossed the Atlantic in 1995 in company with Colin & Penny (my uncle & aunt) and remembered them well. We gave them their details to get back in touch…..  what a small world we live in!!

We made 2 purchases whilst in La Rochelle, 3 fold up bikes giving us more flexibility and we finally committed to ordering a watermaker. 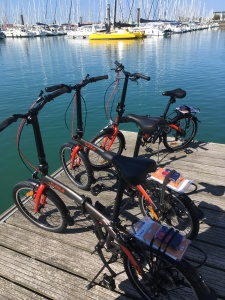 This took a great deal of thought and research on which make & model along with location to go for. In the end we decided on the type we first looked at 2 years ago, Rainman. I will dedicate a page to this once its been working for a while giving all the pros and hopefully few/none cons. For now we have the 230v high output which provides 100-140 litres an hour, which is huge!

With Caroline & Charlotte back on board, we were looking for a weather window to cross Biscay, not helped by the fact that only 1 of the 2 boxes which make up the Rainman had arrived… British customs held one box up as the 2 jars of pickling powder which looked like a lot of white powder got flagged ! After numerous calls and emails to Dave at The Wetworks it arrived with 4 hours until our planned departure… phew! 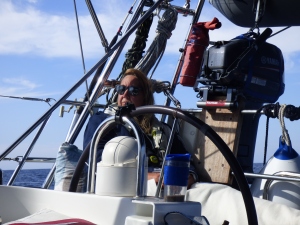 In company with Allegrini we left La Rochelle and headed south west in the direction of either Santander or Gijon, a final decision of which port to be made after 125 miles. In the end it was a no brainer and we all agreed to push on the extra 5 hours to Gijon saving a 14 hours sail from Santander along the coast to Gijon a few days later. So this was our longest passage so far of 255 miles with 2 nights at sea. 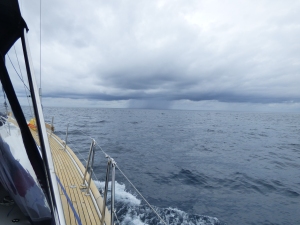 Low swell and very little wind meant motor on for most of the journey but Biscay has a reputation so we accepted motor on over strong winds and big seas. We did see a large squall, tracked it on radar and managed to skirt around it which was good practice for the Atlantic, & the sea was soooo blue too. This picture of Allegrini shows how lucky we were with the weather when crossing the continental shelf!

We’re now in Gijon for a few days and will head off for Ribadeo on Saturday as there is a favourable wind to sail there. The weather is colder here which just doesn’t seem right now we’re in Spain !?!