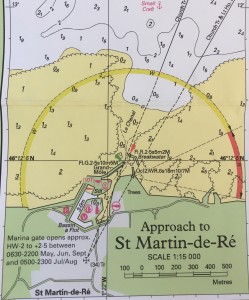 The port website in les Sables d’Olonne  said they were closed to visitors due to the golden globe event, so we had to bypass it and go straight to St Martin-de-Re instead. This was a journey of just over 50 miles which was yet again a motor sail apart from the last 2 hours when a lovely breeze set in allowing peace and quiet. Allegrini decided to while away some time so we had 2 quiz games on the vhf, one on british tv and the other on weather…. we really need to brush up on our general knowledge !!!

The approach to St Martin was a first for us. If a chart shows white turning blue there’s water there all the time, if not there’s nothing or less than nothing (raised areas). This meant we could only enter approximately 1 1/2 hours before a good high water due to our deep keel. The reality was we knew we’d be fine ( allegrini went in first 🙂 ) but …..

What a lovely port we found on arrival, extremely tight to get in though, we were directed to berth next to a beautiful Hallberg Rassy 46 which the owners had just sold and were praying we didn’t hit them. They must’ve been worried seeing us approach with our huge anchor pointing straight at them until the last moment ! The gap was about 50 feet so we literally shoe horned ourselves in between the other rafted out yachts.

The fee here was 43 euros a night so the prices are starting to increase !

I was going to post some pictures of the town, but with the very kind permission of Steve & Helen from Allegrini, we have added their video into this post. They have a camera at the top of their mast which captures beautifully us and other boats moving/leaving and some great shots of the port. Take a look at their blog www.allegrini.co.uk

Leaving St Martin just before high water we headed off to La Rochelle which will be our base for 2 weeks to do a little maintenance and restock ready for our longest sail to Spain. I wanted to know what the thick black line was between the Ile-de-Rei & the mainland. It turned out to be a 30 metre high bridge which we were going under…. yet another first. Here’s how it looked as we went through, bit close from our perspective but there was at least 10 metres to spare. 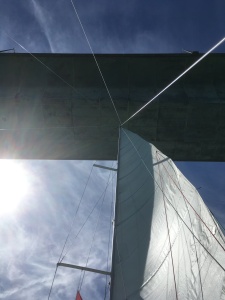 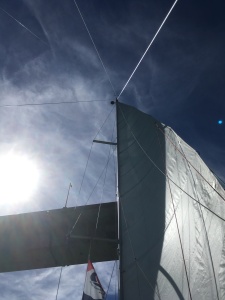 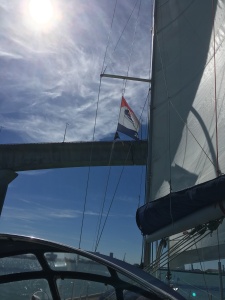 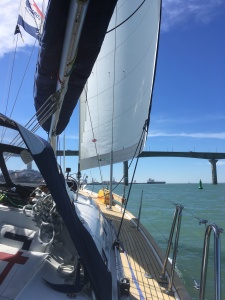 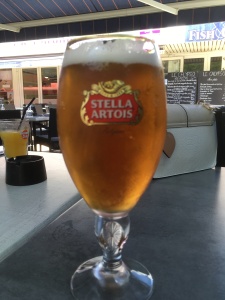 One thought on “Bit shallow here !”