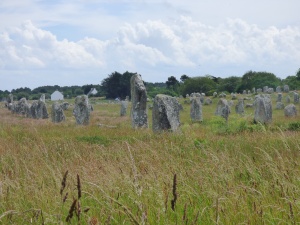 After 4 days in the Morbihan, we moved into Trinite-sur-mer where we would meet up with Allegrini. The capitannerie staff were the most attentive we’ve come across, not only showing us our berth but actually running ashore to take our lines!

Steve & Helen turned up the next day and came alongside us, which was the only place we could be due to our size. Even our boats looked small against the 130 feet racing trimarans docked nearby. One passed us three times last week in very light winds doing over 20 knots and looked effortless.

We all had a day trip to see the standing stones of Carnac, a 4,500 year old site of thousands of stones all pretty much in straight lines. I can’t imagine the reason for doing it, or how many years it took, but it was certainly impressive. 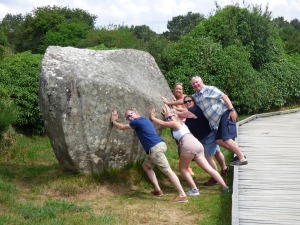 The marina fee was 38 euros a night which now seems to be pretty much the going rate here in France, not cheap but certainly cheaper than the south coast of England. 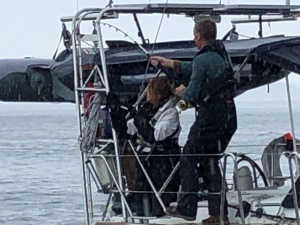 As we left Trinite-sur-mer I decided to put out the fishing line with some feathers on. About 30 minutes later whilst I was down below the strike mode activated sending the line screaming out with Caroline & Charlotte shouting at me to get on deck. Allegrini was quickly called to say we were slowing down to bring in our first fish/fishes so they turned around to photograph everything. It was lashing down with rain and so much line went out it took about 20-30 minutes to bring our catch to the surface, I was knackered by this point. As our catch came close the radio conversation changed from encouragement to laughter………….   despite a valiant effort I can confirm the 15lb of seaweed got landed onboard!!!

After the laughter faded, we continued through the Morbihan up to Vannes, a city up a very narrow river/canal where we will stay for a few days as there are very strong winds forecast.

The channel is shallow and once past the swing bridge the river is only just wide enough for 2 boats to pass each other. Berthing right in the middle of the city is interesting and certainly not quiet, but the views are beautiful.