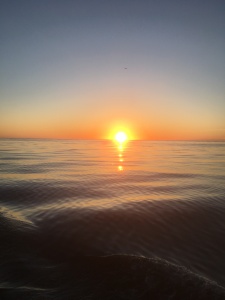 Having spent 3 days in Falmouth at a cost of £31.00 a night on a swinging mooring (£21.50 on our anchor!) it was time to leave the UK. Falmouth is beautiful and as the harbour master said, “we are the first and last port in the UK”. We picked a window meaning we had to motor the entire way to L’aberwac’h on the north Brittany coast, a trip of 101 miles which took 16 hours. We were given a word of caution by friends who’ve sailed the area we’re going into to be aware of the atlantic swell which persists even if there’s little wind, as the weather many hundreds of miles away in the open sea eventually reaches the end of the english channel. They weren’t wrong, with very little wind, the initial flat water became a constant 2 metre swell !
We were met by the harbour master in his RiB who pointed us to berth on the outer breakwater visitors section which wasn’t ideal as clearly the French have no speed limits to speak of, together with an unfavourable wind direction making our 2 nights there not as comfortable as we’d of liked. The price for the berth was 38 euros a night including electric, water and the marina facilities…. in our opinion the facilities were less than basic, with no toilet seats and a shower which provided 15 seconds of luke warm water before having to push the button again, meaning we didn’t use them. The tidal range here is huge too at 7 metres! 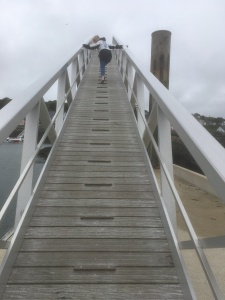 With a forecast of force 6/7 arriving later on 16th May, we decided with Charlottes’ approval as it was her birthday to leave L’aberwac’h and try to stay in front of it down to Camaret-sur-mer a trip of 34 miles through the chanel de four which is a tidal race through a very rocky section. With just the genoa up, we made good time at an average 7kts, the promised wind arrived just as we entered the marina! We wanted an alongside berth which would keep Silhouette off the pontoon, but with the wind at 25kts she decided where she wanted to go,luckily in a space big enough !!!
It looks like we’re here for a few days to allow the wind and swell to settle before heading on south towards Audierne & Concarneau. 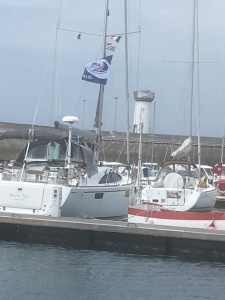 We have also seen another ARC yacht called “Mares Tail” with Jonno & Ethna so introduced ourselves to them and of course had a drink ! They are doing the same as us in taking their time to get to the Canaries, they are doing ARC which is direct to St Lucia but we will no doubt see them again either on this side or certainly on the finish line.

The weather is very slowly improving, but still not shorts weather.