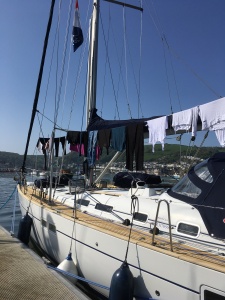 You can easily tell which yachts are cruising yachts, we think this picture says it all !!

We spent 3 nights in Dartmouth over the UK bank holiday and amazingly the weather was absolutely stunning, with wall to wall sunshine. Our next stop was Plymouth where we were to be reunited with our passports…. hopefully.

As part of the WCC arc+ fleet we receive a discount at the Mayflower marina of 50% for the first night or 10% off if staying for a much longer period. Our cruising budget is about average we think but it doesn’t stretch to staying in marinas for too long at £45-50 a night, this is why we have a big anchor!

When we arrived at Mayflower marina we noticed many of the shore lines were attached to old car tyres which were then attached by chain to the pontoons? We soon found out why. The main channel to the south is very busy with naval and commercial workboats which have their own minimum steerage speeds, this causes swell which reaches the marina. As we weren’t connected by tyres our shore lines snatched every time which was frustrating. That said the marina itself is very nice with a great chandlery on site.

We knew our passports were in a secure place, however it was a little worrying when the taxi driver said he’d never heard of the location ?!? We were going to get a bus but so pleased we didn’t as we would’ve never found it. The taxi driver was brilliant though and eventually we found the address and now have our passports with 10 year US visas attached 🙂

A weather front bringing strong/gale force winds has been forecast so we left Plymouth and actually “sailed” on to Falmouth having to put in 2 huge tacks though as the wind typically was coming from the exact direction we wanted to go. Out in the channel we found ourselves in the middle of some navy war games with about 6 vessels darting around and 2 very very fast jets “attacking” them. At one stage a destroyer made a charge for us and we felt like we were being lit up like a christmas tree !

We picked up a hitchhiker along the way, a pigeon landed on deck with what looked like a damaged wing and stayed there for most of the trip only leaving when I jumped on deck to bring in the mainsail. The “gifts” left on deck were memorable for all the wrong reasons….. he grabs a free lift and then craps everywhere !!!

So we are now in Falmouth on a harbour authority swinging mooring which costs £31 a night until the weather blows through in about 3 days. It is less to anchor but with a south and southeasterly blowing up there’s fewer safe places to anchor in calm water and we do get to use the very nice facilities block.

This is our last UK port!!!