Our fridge compressor has been making a metallic sound for some time now, which finally got to us. It works fine but the noise on a quiet night is really annoying, so we decided to replace it. The original Frigoboat system is still available from Penguin but the very helpful man on the stand at the boat show said their standard system was better and cheaper. Although still air cooled and not as efficient in warmer waters, it is a simple connect to add a keel cooler if we want to. I will not swear on this blog, but the fitting of it was an absolute b*****d. I reckon Beneteau made the original fridge and associated pipes then built the boat around it!!! I had to make a large hole in the under sink cupboard just to see the pipes and found they were clipped in around the freezer unit meaning they were never going to come out by pulling. So my quick changeover ended up taking 6 hours. The next day it stopped working, and I traced the fault to the thermostat. I knew it was the same as the old one, so whilst waiting for a replacement I’d swap it over……. now to retrieve it from the bin, YUK 😦

The lesson learned was, don’t be so quick to throw things out!

With the UK sailing season fast coming to an end, it was suggested a 4 day trip to put in some miles with the full “Atlantic crew” on board. This was myself, Caroline, Charlotte along with Nick & Carol making up the 5 for the adventure. The original plan was to sail to Guernsey-Dartmouth-Poole as a triangle course, unfortunately the weather had other ideas with the tail end of 2 hurricanes headed our way. Although not due in until our final day, we saw no point in chasing towards it, so went from Poole to Brixham to Weymouth and back. We were able to sail all points including a full run downwind with the main and genoa poled out goose wing in average 22kts making it good practice in a rolly Lyme Bay.

We also had great excitement as for the first time ever we had a pod of dolphins play around the bow. Sadly we didn’t get any photos but we can’t wait to see them again.

Nick seen here in his usual laid back position is a really knowledgeable sailor at home on the water, and a huge asset…… (he’s also really good at taking the mickey so I need to be on my toes)!!!

He and Carol have just bought a Southerly 135RS to replace their Westerly Corsair, and are eager to get to know her. We will see lots of them next spring/summer sailing in the same direction until they head back to Poole and fly out to us in the autumn.

We haven’t sailed into Weymouth for a long time, and as it was the end of September and the weather was pretty grim we were one of only 2 boats on the quay.

The trip has been a big success and a thankfully small list of jobs to do we’d not thought about. This shakedown was really important to all of us and we would recommend it to anyone contemplating distance sailing. 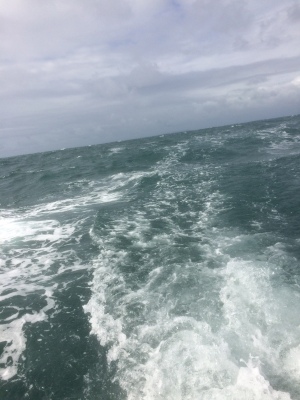 The next time we see this we hope to see blue water and sun !