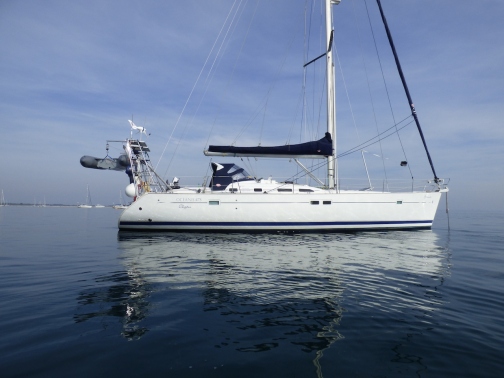 As we’d not done too much sailing over the last few weeks, partly due to other commitments but mainly because of a rubbish August “again” ….. we decided to do a quick hop over the channel to Cherbourg, a french town we really love. The forecast was due to be very little wind meaning a motor all the way, but the forecast was wrong. We managed to sail right from the anchorage by Old Harry Rocks all the way to the inner harbour at Cherbourg in 8 1/2 hours. The wind was a perfect west/southwest 5 only dying away in the last 10 miles meaning we averaged 7.4 knots for the trip which was easy sailing. If we can maintain that speed next November on the Atlantic crossing from the Cape Verde to St Lucia, it’ll take about 12 days …. “that’ll do nicely” ! 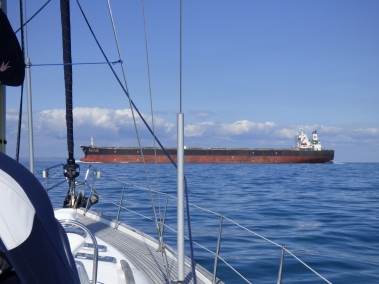 Crossing the shipping lanes was the usual case of playing chicken with some very big ships. We never assume shipping will give way (we were motor sailing though so not relevant), but one giant container ship certainly did as AIS showed their course alteration. They look so graceful, the one in this picture was gliding along at 18kts barely leaving a wake! 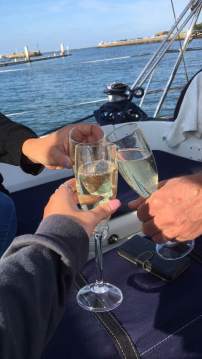 As mentioned briefly in the last post, September 1st was the day the world cruising club opened up entries for the ARC 2018, I received the email and we went online in the afternoon to sign up. This was a huge event for us….. embarrassingly halted by my card being unauthorised. After a call to the issuer it turned out their system put a security block in place due to “unusual activity” which is quite reassuring really.

30 minutes later, we pressed the submit button again and this time everything was ok meaning the champagne (well prosecco!) was handed out.

Steve & Helen on Allegrini have changed their plans and have entered ARC+ along with us now, so there’s 2 Beneteau 473’s going in the same direction at the same time…… hmmm !!! The socialising and sailing is going to be epic 🙂

We have on board an almost new 110% yankee furling Genoa which was unlikely to see much use especially as we have a new Genoa in place, so we came up with a plan not to waste it. We have had soft hanks fitted to it so it can be raised up our inner forestay, in effect giving us twin head sails. We can use both on the down wind sections poling each out, one with the boom and the other with the spinnaker pole, but the yankee still has the ability to fit on the furling system if the main Genoa needs lowering. Quay sails have said it won’t furl tightly with the webbing/hanks in place but is a clever idea, something hood sails did a few years ago. We were hoping to try it out on the France trip but it wasn’t ready in time so no pictures yet.

The Southampton boat show is next week which will be our last…. hope the card doesn’t get blocked again !