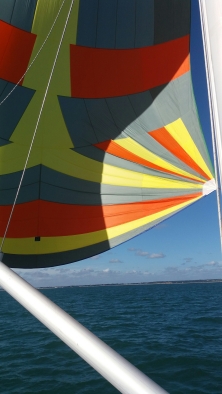 Whilst we’re still on target with our preparations, we are finding it a bit frustrating getting jobs done when you have to rely on services. We had decided not to fit an arch, relying on the snap davits we were very kindly given by Steve & Helen from Allegrini. However, when we realised the placement would be positioned exactly where our toes would be when boarding, we changed our minds and sent off enquiries to fabricators both locally and in the midlands….. all specialising in this type of work. The prices (when they could be bothered) were wildly different and most too busy to even look. We know what we want and even have drawings to help, hazard tape over snap davits  perhaps 😦

An unexpected purchase has been a new genoa to replace our existing 150% which we thought was fit for purpose. Unfortunately after having our arses kicked by friends on a Westerly Corsair and being told our sail was “baggy” which meant it had stretched and won’t set properly, we looked into a new one to stop the embarrassment and ribbing. Stainless steel fabricators really need to talk to sailmakers about service…. We finally decided on Kemp Sails in Wareham who have made a 130% performance genoa with a number of extras making it more suitable for our needs including the new weathermax UV strip which apparently out performs in durability anything else. We were going to buy a cruising chute too but have a Quantum AP spinnaker and can’t quite figure out what it is. Flying it last weekend with friends Nick & Carol on board to help, Nick said he wasn’t too sure either. The general feeling is it’s a bit of a hybrid so I will need to email Quantum sails in South Africa to find out. So far it looks promising and we may well not need to buy one now…. fingers crossed.

We received a call from the riggers letting us know that the boatyard that was due to unstep the mast has decided they no longer want to do it, “the mast is too big, the boat is too big, the draft is too deep, not enough room in the yard & we’re a member of staff down”.  Oddly its the same boat with the same mast etc etc etc when they agreed to do it a couple of months ago! Ultimately the Beneteau 473 does have a big mast and not all yards can facilitate this kind of work which is something to bear in mind for the future, so in conjunction with the riggers the decision has been made to re rig Silhouette with the mast in situ. It will take a little longer to do but without the cost of mast removal, so in effect little difference financially, 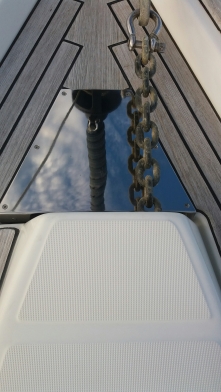 In spite of this we really are getting there, we want as much done before the season starts again in 2017 so we can iron out any issues without worrying about it as we approach 2018 and the off.

The teak decking in front of the anchor well was starting to wear away as the chain was bouncing up & down when being deployed, so we have fitted a stainless plate which folds down into the well to take the wear. It looks great and fits really well which will last for years.

The 2016 Southampton Boat Show is upon us and this year we will go with a plan to visit specific stands. Sailfish Marine have just taken on distribution of an Australian watermaker called “Rainman” which is portable, simple and apparently able to produce up to 120 litres an hour!

Satellite phones and email systems suppliers along with Ocean Safety will be visited too, so a busy day ahead.