Back in March we picked up a fishing net around the prop which needed a diver to clear (the water was way too cold for me!) which was the first time for us in all the years of sailing. Well, we got another one last weekend when motoring down the Swash channel towards Old Harry Rocks. We heard a thump followed by a rumble and vibration through the cockpit sole immediately thinking damage to the prop, bearing or another net. This time however we were prepared. We dropped the anchor just outside the channel near the rocks and taped our GoPro camera to the boat hook, and the result was a net sack meaning it was time for me to put on the wetsuit and clear it away. We are net magnets !!!

Whilst working on the job at hand I was pleasantly surprised to see the hull fairly clear of barnacles and build up of sea life, just some slime which can easily be brushed off. We’d decided in the end not to come out of the water earlier this year and would monitor instead. As Silhouette will be ashore from October for a few months having work done, we couldn’t see the point. Seeing how clear the hull was meant it was a good decision…. wow we got something right !!! 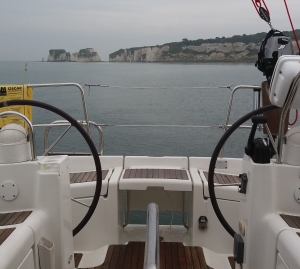 Propeller cleared we stayed in the shadow of Old Harry for the night then motored in the morning to Yarmouth on the Isle of Wight on a glassy sea with no wind at all. Wow has Yarmouth changed since we were there some 14 years ago, the pile moorings are all gone replaced by mostly walk ashore pontoons. The harbour masters in their launches are different, Bernie and Brynn having long since retired, but nevertheless as helpful as ever. As soon as I mentioned we had no bow thruster to turn into a tight space, a big smile bounced back ” no worries I’ll give you a nudge if you need it”

So what hasn’t changed? Yarmouth itself is exactly as we remember it including the damn fine beers on offer and the tardis that is Harwoods chandlers. I wouldn’t want to do an end of year stock take put it this way…..

I noticed another 473 on a finger berth so went over to say hello and cheekily had a tape measure in my hand as I’d noticed their liferaft was atttached to the stern just above the “stupid locker” and wanted to see how much room there was around it. I’m not happy with our valise tucked away in a locker, it’s heavy and If the worst ever happened and it needed to be launched I want it done quickly and easily. Introductions done and measurements taken we had a quick chat like you do about our boats. My apologies, but I’m rubbish at remembering names I do know they keep the boat in Swanwick marina AND that it wasn’t Steve & Helen from Allegrini  !

After a great night on board with surprise visitors Lee & Julie who arrived by RiB from Lymington as it was getting dark, we readied ourselves for a beat against the wind and tide (by choice) with a westerly force 6 to look forward to. As we punched tide just outside the harbour we heard a mayday from a 39 foot yacht that had left the berth in front of us about 45 minutes earlier. They had been dismasted and drifting towards the rocks of Colwell Bay. We were about 25 minutes from them  punching the tide but the Yarmouth lifeboat got there in 15 from the mayday going out ….. mightily impressive. No sooner had they recovered the rigging and towed the yacht back to port, the lifeboat was called out again to an 85 foot yacht with engine failure. We got to see the lifeboat at full speed passing us twice in one afternoon. The tow this time was the biggest tow the Yarmouth lifeboat had done to date.

leaving me to decorate her bedroom and find a fault with our Raymarine AIS system which reboots whenever it feels like it. Hopefully it’s just a voltage drop due to bad connection, just got to find where the unit is on board now !