The settled weather of the last 2 weeks was coming to an abrupt end with the approach of Storm Katie due to hit full force on Easter day and Bank holiday Monday. The only day which looked promising was in fact Good Friday, As you can see from the photo, Good Friday was really quite special with wall to wall sunshine and light/moderate winds. This photo was taken by my parents from the Sandbanks chain ferry, it’s not often to get pictures of your own boat under way!

Arrangements had been made some weeks ago for Paris, our daughters best friend to spend the weekend with us on board, in the end we had an extra member of crew for a day in Felix. All 3 of them are on the Rockley Btec course so none were novice sailors although Silhouette isn’t exactly a Wayfarer or Pico !

We were going for the 08:30 bridge lifts so at 08:10 I released all the shore lines except 1 spring using the motor to hold us against the finger. Felix asked to help so he stayed on the finger ready to cast off. At that moment the wind shifted and Silhouette decided she wanted to get going and I must admit I forgot all about Felix!!! Apparently he just made it on board with an Olympic jump…. the devil in me did think how funny it would have been had he missed, but that would have been cruel and he was trying to make a good impression on us 🙂       (So yet another lesson, get the shore lines sorted out). 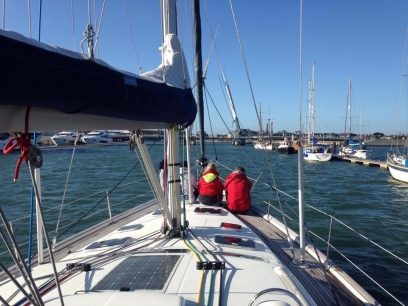 With a forecast of NW3-4 backing SW5-6 later the stage was set for a great day. We sailed out well into Poole bay and then returned to anchor in Studland for lunch and sun bathing. The motley crew were treated to Champagne and Pringles …… odd mix but the Champagne was to celebrate our first proper sail of 2016.

The yacht in the background behind the “Charlotte and Paris” pose must’ve thought it was August though as 2 young boys jumped in for a swim with just shorts on………. CRAZY OR WHAT !!! 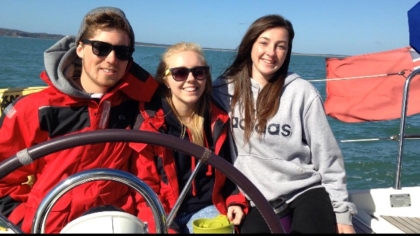 Just after lunch the wind veered round to the SW and started to pick up, so once Felix, Charlotte & Paris had finished their photo shoot we headed back before the forecast “weather bomb”.

We have a 33Kg Rocna anchor and this was the first time we’d used it, just as well we have a power windlass as the anchor had dug in really well which is very reassuring too !

Time for another lesson… don’t assume anything. When reversing back into our berth the owner of the boat next to us and his father took our lines for us. I know I was coming in spot on so why was the stern kicking over towards the yacht next to us? The helper with our spring realized his father was continually pulling the bow line which was in turn pushing our stern out. Quick remedy with the engine and a quiet word averted some embarrassment all round. So the lesson is never assume the person you’re handing a shore line to actually knows what they’re doing !

Oh and another lesson on assumptions, we ran out of gas on the Thursday night which wasn’t a problem as we had a spare gaz bottle with the seal on it. WRONG…. the previous owner had used the bottle and put a cover on that still had the seal in place. Picture the scene of me walking around the marina whilst it was pouring down looking for the night watchman to open up the stores for me…. not a happy chappie.

Saturday brought the rain and wind at F7 gusting 45 kts which continued into Sunday before things got really interesting. The fast moving deep depression was at Lands end at midnight and into the North sea by 11am on Monday with storm F10 winds gusting over 75kts in Poole and over 100kts in the Solent. Colin & Penny, my aunt & uncle who live/work in the Caribbean thought it would be good heavy weather close maneuvering practice ……… not only are they great sailors, they’re A list comedians too !!!

The E120 has developed a fault with the back lighting. It’s fine at night but not bright enough during the day. A chat with the Raymarine dealer has identified the issue as a common fault. The pcb needs replacing at a cost of £240 plus carriage charges. Also I’ve noticed one of the spinnaker halyards is getting wrapped around the furling swivel at the top of the mast. It might be a simple case of stowing the halyard against the mast when sailing but to be safe someone will need to go up to check all is ok. All I need is an approval seeking young man yet to realize the top of a mast in strong winds isn’t the place to be…… hmmm who shall I call ?  🙂